Marcus Keating participated with Collective Ending in the Artist-Led Critical Exchange Programme as an artist from The Lombard Method, Birmingham. 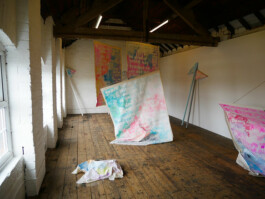 Since the beginning of the pandemic, Marcus Keating's studio practice has been painting based and heavily autobiographical. They make work about memories of trauma and peripheral moments, which have likely been informed by early events of abuse. They studied Sculpture in Melbourne, back in 2003, the course was mostly geared towards spatial practices and supported video, performance and ephemera-based work. Naturally, it didn’t take long before their paintings became more sculptural.

Their curatorial practice is via The New Happiness, a space that began over 10 years ago in various forms, but has recently had a more permanent base in their studio at The Lombard Method. They are interested in The New Happiness being a space showing queer, femxle and marginalised bodies, though they are still working through what this actually means. They have built many exhibitions based on queer themes and creating new discussions and discourse around themes of safety, fear and role models and they'd like to use The New Happiness to begin to make more positive steps within a queer discussion. Marcus is interested in curatorial elements that break away from the traditional use of signage, explicit themes and artists works standing as isolated objects. They love shows where work interacts with one another and bleeds into the space, creating unpredictable ways of viewing the work.