Leon Trimble participated with Collective Ending in the Artist-Led Critical Exchange Programme as an artist from The Lombard Method, Birmingham. 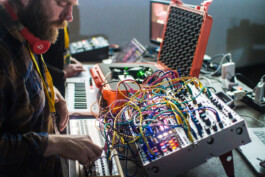 Leon Trimble is an audiovisual artist based in Birmingham who has been performing live AV for 10 years, his first gig supporting Nic Bullen at BEAST’s Soundkitchen in 2012. Since then Trimble has performed all over Europe - for music tech, chip-tune audiovisual and modular festivals.

His Gravity Synth project working with the Gravitational Wave Research Department at the University of Birmingham led him to perform on the BBC World Service for the Digital Planet 18th Birthday in the BBC Radio Theatre; and also bounce the sounds off the surface of the Sea of Tranquillity from inside Abbey Road Studios via the Dwingeloo Radio Telescope. Leon is currently working with LIGO researchers at the University of Glasgow. He is in the final year of an MMus Experimental Performance at the Royal Birmingham Conservatoire.