Jonathan Kelly exhibited with Collective Ending as part of A Land of Incomparable Beauty. 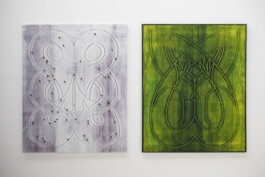 Jonathan Kelly draws on the earliest art, the Paleolithic, as it looks beyond today’s complexities to more universal concerns of life, death and sexuality. In his ‘Easy Pray’ series Kelly paints totemic idols as headless figures in contorted yogic positions, they appear to emerge from within the canvas, as if these dormant deities have been illuminated by saturated colour. Stuck-on elements, from arrow heads to Rudrakshas disrupt the image but also align with the figure’s geometry. Like offerings, adornments are placed in a ritual manner, as in reverence or an act of divination. The iteration of the motifs speak of the ritual and habitual nature of belief, like a mantra the paintings are between meaning and meaninglessness. Kelly posits how painting functions as a self-deceptive activity that distracts from and suppresses existential doubt. By paralleling art production with religious belief – both essentially irrational acts – he questions their implicit values.