Giorgio Sadotti exhibited with Collective Ending as part of A Land of Incomparable Beauty. 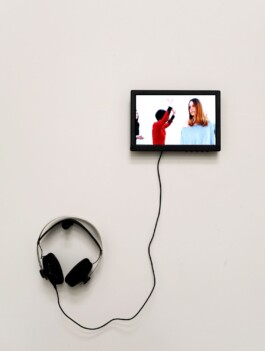 Giorgio Sadotti, ON IT, 2013 (A Land of Incomparable Beauty)

In 1993, Sadotti exhibited at City Racing, and in 1996 participated in a group show organised by City Racing at Bricks and Kicks in Vienna run by Muntean and Rosenblum. Other solo exhibitions include the Henry Moore Institute (2006). His work is held in the collection of the Tate and the British Council Art Collection. In 2003 he won a Paul Hamlyn Award for visual arts. Giorgio (b. Manchester) lives and works in London. He graduated with an MFA from the University of Syracuse in 1981, having previously completed his MA in Sculpture at Manchester University (1979) and his BA in Fine Art at Trent Polytechnic (1978). Recent exhibitions and projects include: THIS THIS MONSTER THIS THINGS (Solo Exhibition) at The Ikon Gallery (Birmingham, 2013), SPELLS LIKE TREE SPIRIT (Solo Exhibition) at Tate Britain (London).